Awesome episode! Thanks to Kelly Smith and Tracy Parish for lots of great ideas to add and build onto the overall game play experience. We’re a long way from adding those ideas yet. I need to finish up 3-ring game play, and then build two more for 4 and 5 ring game plays. Fun!

Started this episode sketching out a potential solution for tracking Best Score. It’s one of those calculations that seem simple to set up and you know it’s right there on the tip of your noggin, but for some reason it’s fighting me.

Also, I’m counting number of Games (attempts). Example: For a 3-ring game – If a user correctly stacks the rings from Tower A to Tower C in 9 moves (minimum is 7), feedback displays the number of moves plus the minimum and a chance to Play Again. When the user starts over, the Game counter increases to 2 for the 2nd attempt.

Those two are simple and working just fine.

On the first Game it’s not a problem and I’ve added a Best Score where I push the value of that Game’s number of moves. On the second Game and subsequent games (attempts) I need to keep the Best Score and not reset, evaluate if Game 2 is less than the current Best Score – if so, update Best Score. If not, ignore.

Simple, right? It is literally causing me to have a brain cramp! I’ll figure it out eventually but it’s not a pressing concern at the moment. More of a pesky, “I need to solve that!”

The ideas today came flying in, though! Here’s a list:

The Tower of Hanoi is more of a puzzle than a game. Unlike a “game” where it’s addictive nature motivates you to keep playing, this game has a finite end to it. Once a user achieves the minimum number of moves per level, what will motivate them to keep playing the same game? I can add more rings for more levels. Kelly even suggested building levels up to 10 rings! That’s 1,023 minimum number of moves to win! Can Storyline support that many layers?! Sick!

Here’s the final sketch of the potential map for setting up the overall game and its levels. During the broadcast is a really rough outline sketch, so cleaned it up afterward. 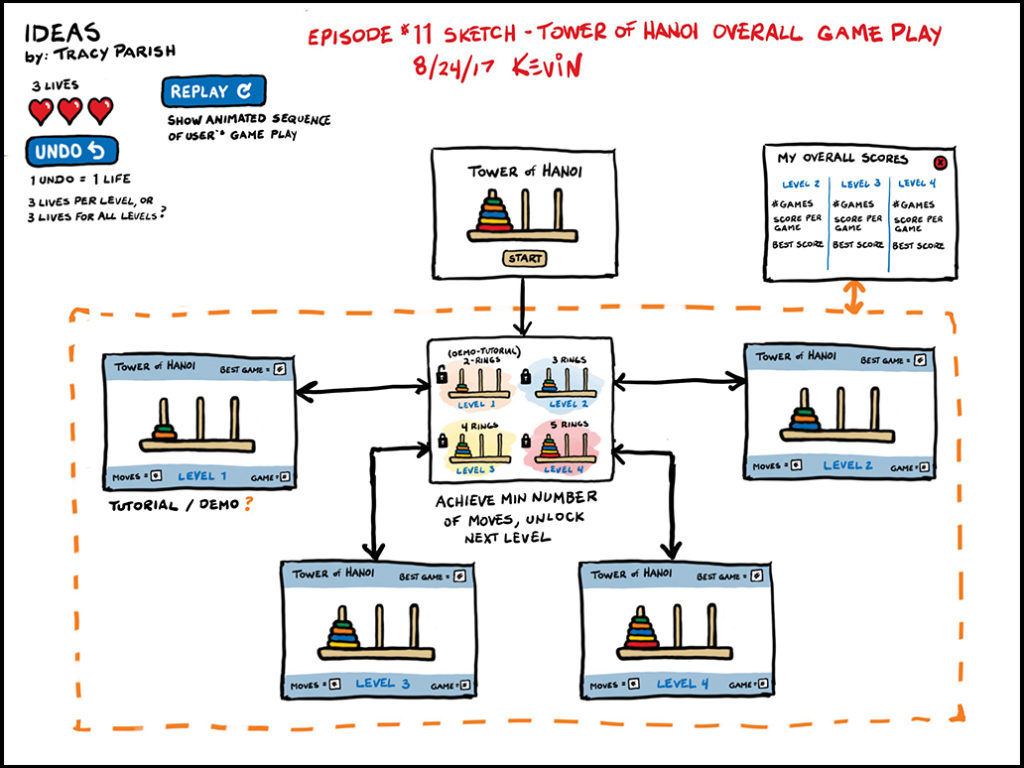 Be sure to LIKE NuggetHead Studioz Facebook Page to keep up with notifications and future live events! While you’re at it, go ahead and subscribe to my YouTube Channel to keep up to date on any wacky future ideas!