You are here: Home / Graphics / 3 Steps to Graphic Record Your Next Vacation

Taking hundreds of photos on vacation end up in cloud storage and forgotten. A graphic record of your vacation is a perfect way to capture the entire adventure!

Growing up as a kid going on annual vacations I would always get those disposable cameras to capture the adventure. However, these little cameras usually came in 24 or 36 exposures and I could only afford two or three for the trip. Try restricting yourself to less than a 100 photos on your next vacation! Even though care was taken in choosing what photos to take, most of the developed photos ended up as blurry or over exposed.

I would pick a dozen or so good photos out of the bunch and put them in a little photo album. Oh, and be sure to write the date and place on the back of the photo! Toss in a souvenir or two from that trip and it’s in the bag until next year’s vacation.

Today we have the ability to take an unlimited number of photos of everything several times. These modern day photos are not for developing or putting in photo albums. Rather, they are usually for instant sharing on our social media streams. Further, our precious photos end up in the cloud somewhere maybe in a “summer vacation” folder. Forgotten.

Our 2016 summer vacation was going back to Hawaii. Our first trip to Hawaii I did exactly what I explained above – hundreds of digital photos that I haven’t looked at since I put them in the cloud a couple years ago. This Hawaiian visit I had a new idea where my plan was to record the trip in a journal, sketch out a plan and then draw the entire vacation into one graphic image. 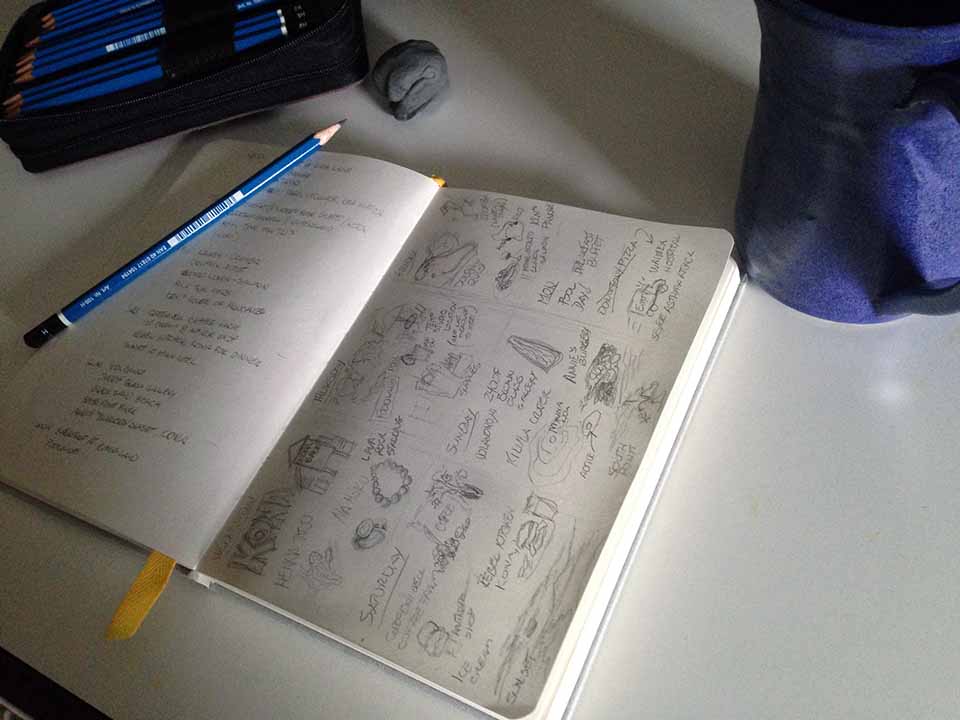 We also flew straight through to Hawaii and back this time with a red-eye flight between Vegas and Honolulu. I figured the 24-hour overall travel time was an adventure in of itself so I added the flights as flanking scenes to the week.

From there it was off to production. Drawn digitally in Photoshop on a Wacom Cintiq Companion2. 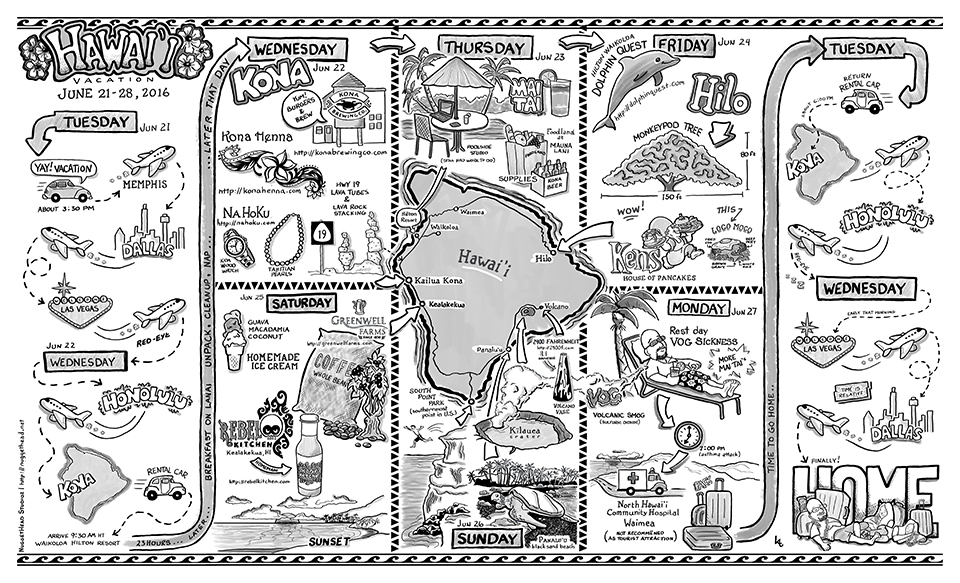 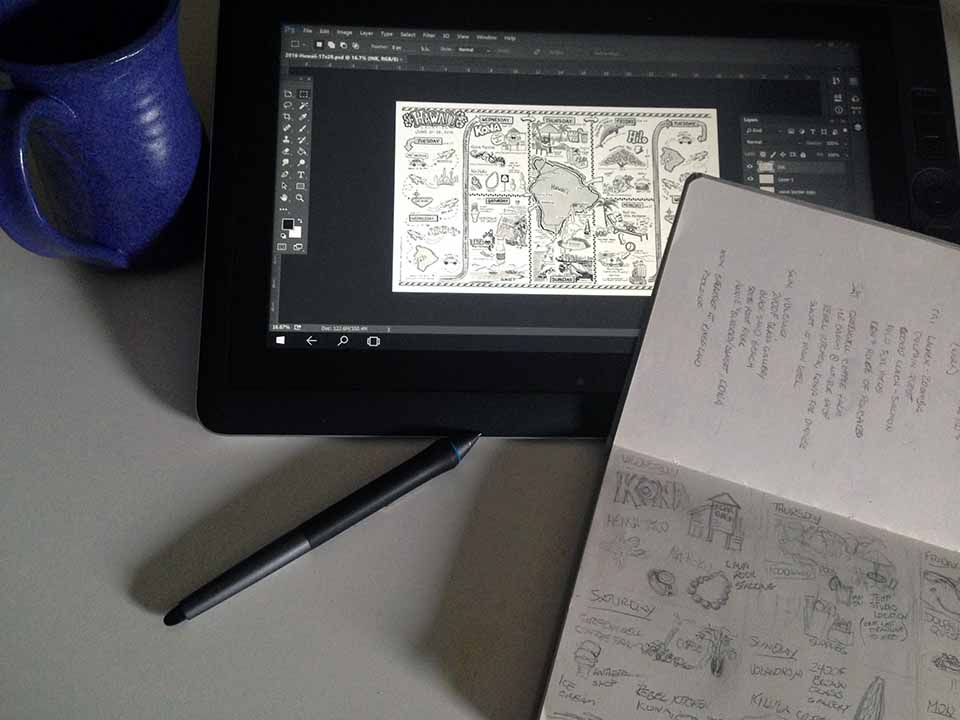 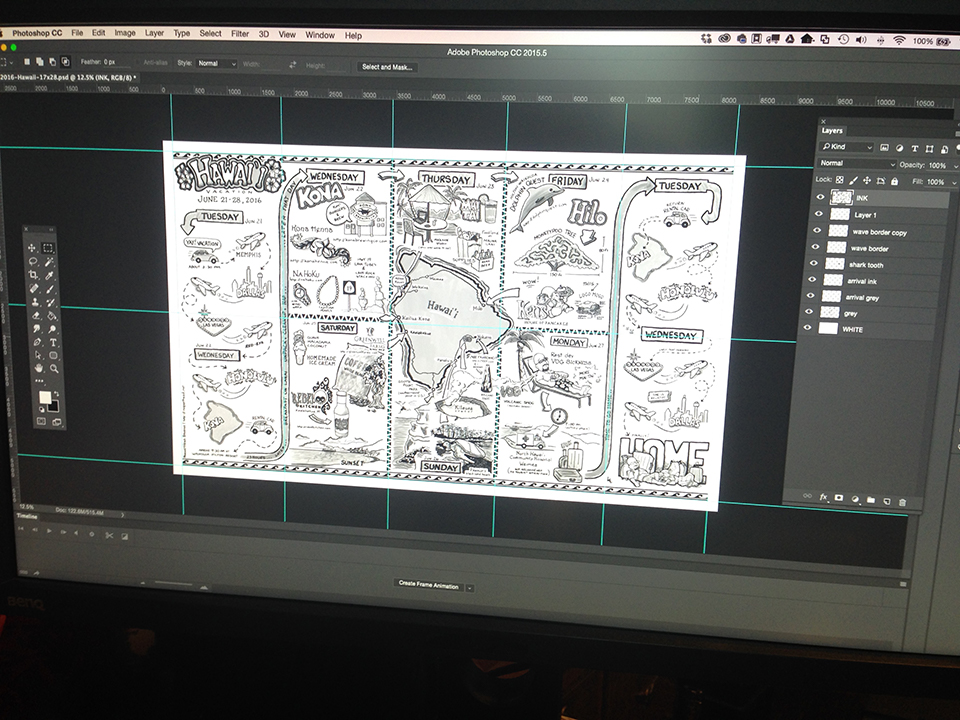 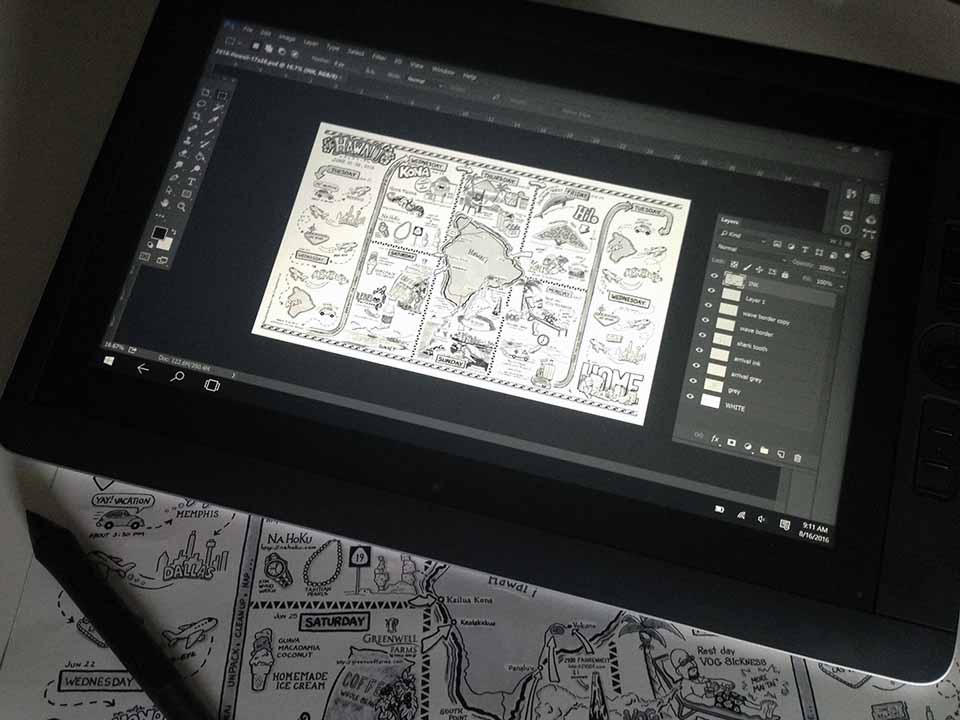 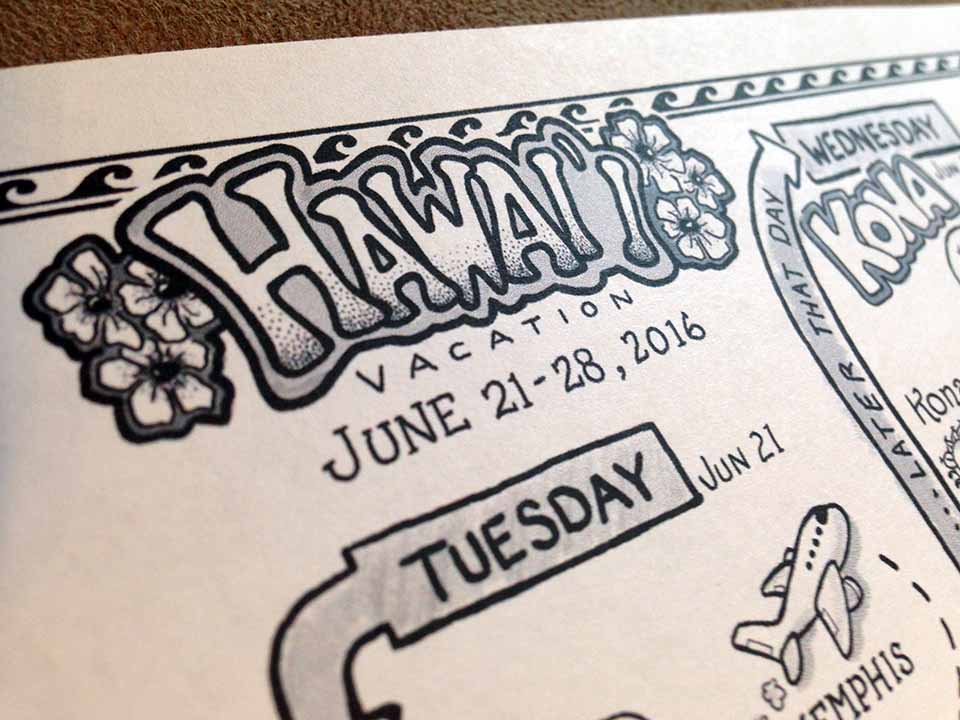 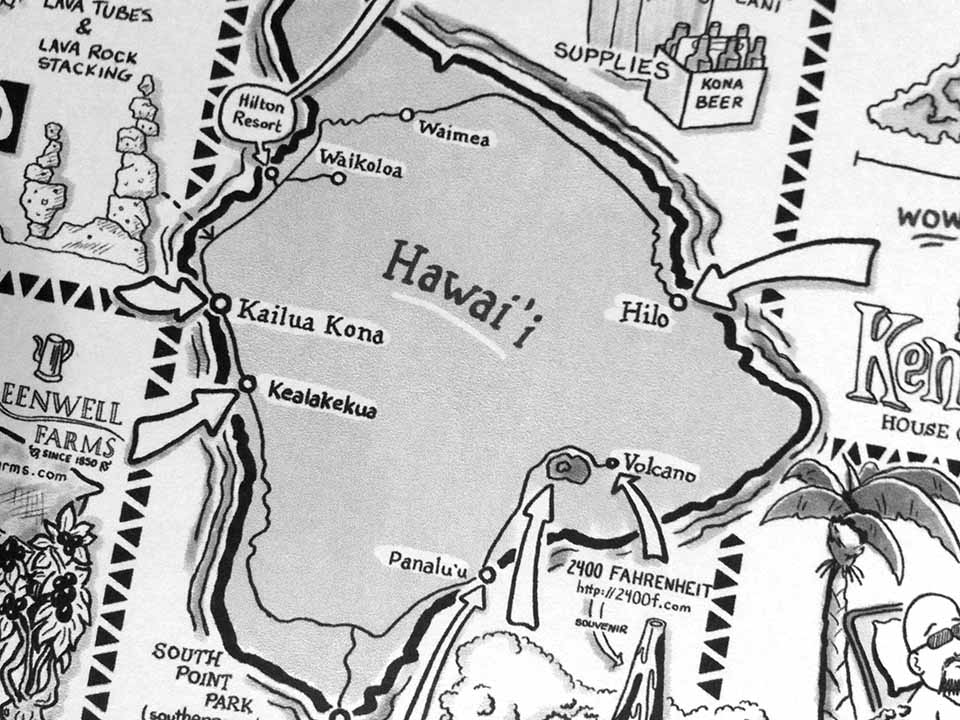 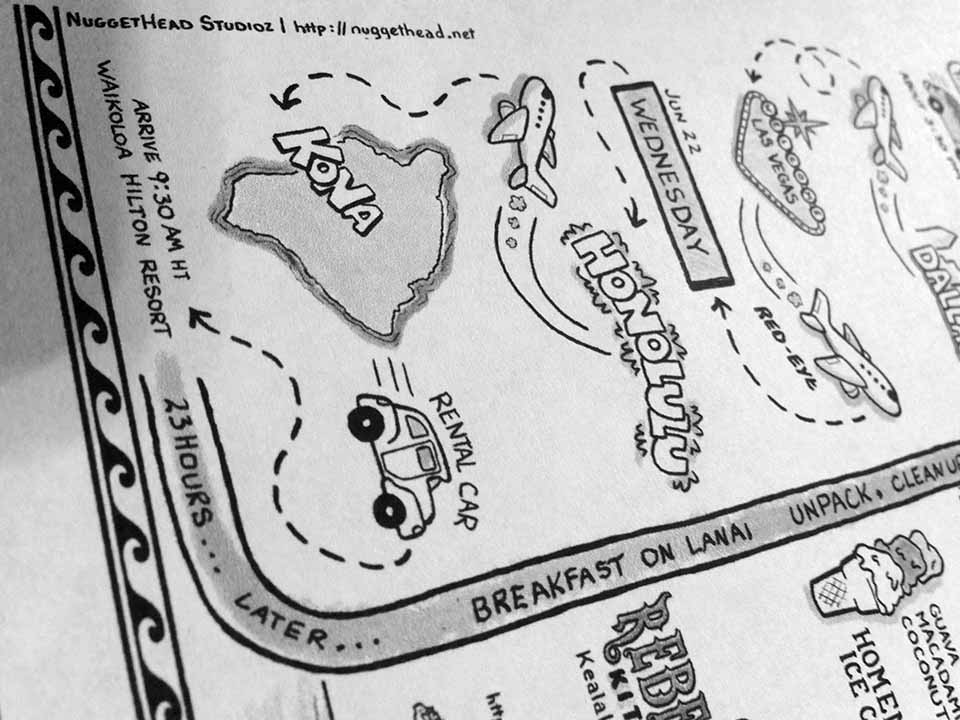 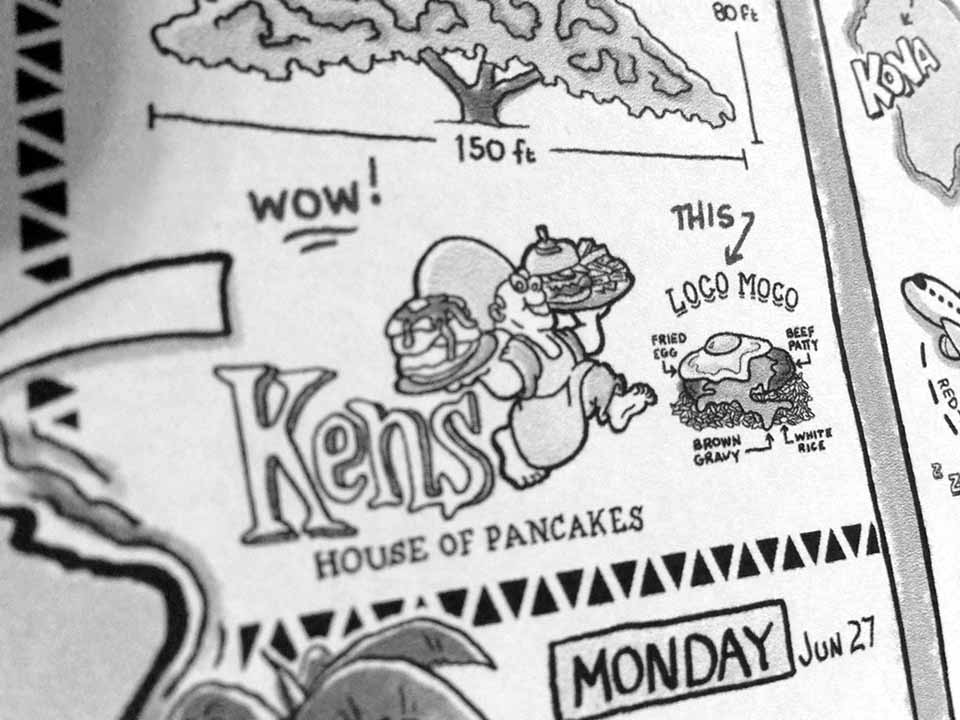 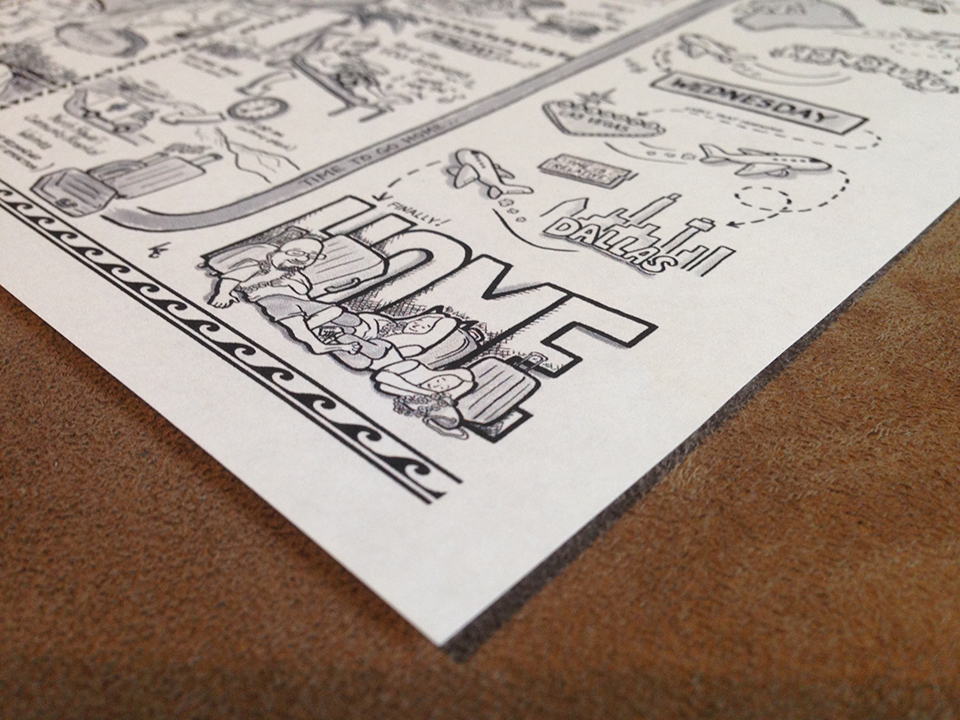 Get your next vacation graphically recorded

Would you like a digitally produced high resolution graphic record of you next vacation suitable for framing? If so, follow these three steps: