Walking out to load my bags in the car last Monday (March 14), I tapped the Weather app on my iPhone to check what to expect as I headed to Orlando for the 2016 Learning Solutions Conference & Expo. Where I stood the current temperature was nearing 70 degrees while in Orlando it was slightly cooler. That’s a first!

The temperature in Orlando really didn’t matter because I knew the temperature at the conference would be high (metaphorically speaking). This was my 7th Learning Solutions attendance in a row. It is also the very first conference I attended that I felt “at home” back in 2009. My peeps. The atmosphere seven years ago that fosters networking only gets better every year.

It has been a long time since I actually participated as a true attendee because I’m usually booked solid, and in some cases double-booked all week. This year was no different and loved every minute! My only regret is not having 25 hours a day to catch up with friends and spend quality time getting to know new friends. 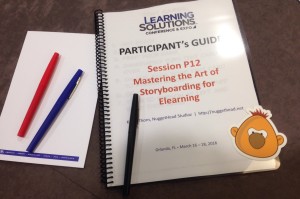 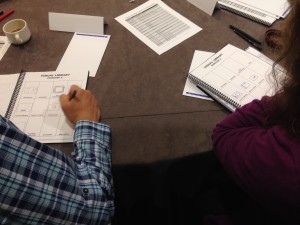 Started the day loosening up with visualization exercises creating a visual library to communicate various screens and activities commonly designed in an elearning project. We didn’t even look at a laptop until late in the afternoon!

Busiest day of the week kicking off with the keynote, Bill Nye the Science Guy on Fostering Constant Paths of Curiosity. I recently started using an iPad Pro with the Apple Pencil to sketchnote and this keynote was the third live keynote digital sketchnote I’ve done. Still getting used to the various apps and getting over the feeling of graphite scoring across the fibers of a sheet in a well-bound sketchbook. 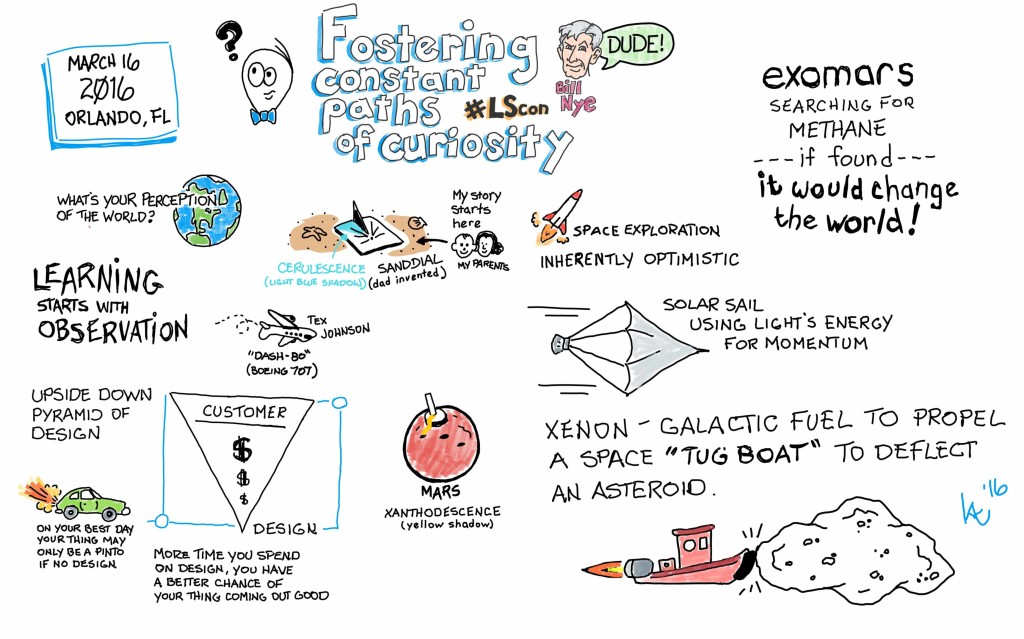 I met Kelly Kingman of kingmanink.com who is a Graphic Recorder and was also at the keynote. In a later blog I’ll define the differences between Sketchnoting and Graphic Recording. For now, both practices are simply capturing key concepts and big ideas and recording them visually. Below his her capture of Bill Nye’s keynote. 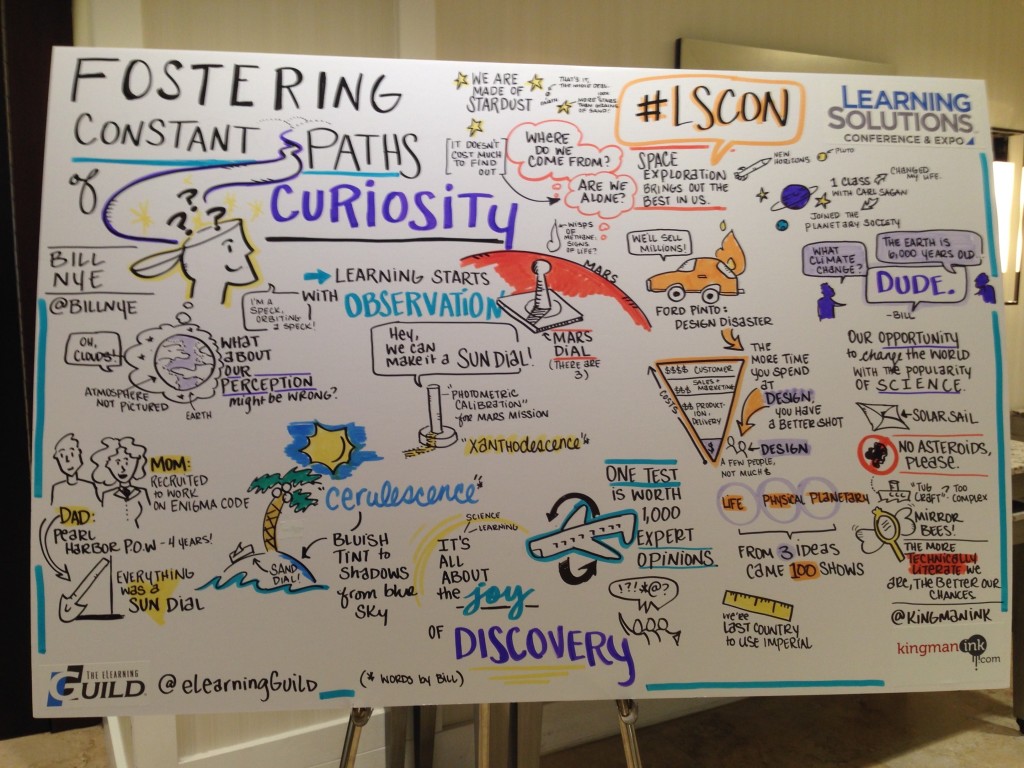 After the keynote, I had a couple concurrent sessions starting with Understanding the Elements of an Elearning Template followed by, Sketchnoting: Capturing Ideas and Concepts with Visual Narratives later in the afternoon. That evening, what started a few years ago sitting around playing analog games, has turned into the popular scheduled “Game Crawl” event.

I did not officially count how many tables were actively playing games, but at our table we played Story Cubes and Get Bit! Here’s a fun stop-motion animation video of a Get Bit gameplay.

Early Thursday morning I led a Morning Buzz discussion on the process of storyboarding. Bummed I missed David Kwong’s keynote, Think Inside the Box: Creativity with Constraints due to an impromptu discussion with a potential project. Yes, I intentionally skipped the keynote to meet new friends, discuss like-minded topics, and foster a new relationship that may result in future opportunities. Is that not the pure definition of networking?

The most anticipated event of the week is on that last night of the conference. DemoFest. Put several dozen tables in a larger ballroom where each table is demonstrating a real project from real practitioners. Those in attendance wander around for a couple of hours viewing, asking questions, and of course, networking. The night ends with collective peer voting with the results announced at its conclusion.

Depending on how one looks at it, fortunately or unfortunately I didn’t really have a chance to look at any of the entries this year. Just as DemoFest began, I get a text from David Kelly asking if I was indeed at the event. I replied that I am and when he approached he said, “Follow me, I have an idea.” Whenever David says he has an idea it usually involves something fun. He led me over to a large foam board resting on two easels and said, “Kelly (Graphic Recorder) is taking the night off. I have Sharpies. Your canvas if you want.”

When preparedness and opportunity intersect. Opportunity, yes. Prepared. Not so much.

First, skecthnoting in a sketchbook or app is quite different than standing in front of a 4 foot by 3 foot canvas with nearly 1,000 people in the room. As David departed to retrieve the Sharpie, several thoughts ran through my mind. 1) I am in no way even close to Kelly Kingman’s live skills. 2) I have absolutely no idea what to do. 3) Sharpies = permanent = no eraser. 4) What’s the worst than can happen?

While waiting for David to return, I asked a few friends for an idea and Bianca Woods @eGeeking suggested something related to the DemoFest categories. That’s it! Draw out a visualization of the 11 categories featured at DemoFest. The plan immediately formed in my head and I could see the end result.

The end result however did not quite come out exactly as my mind’s eye envisioned. What did I learn? Drawing live on a big board is WAY more challenging than the same idea in a sketchbook. Size, perspective, spacing, and a host of other considerations are exponentially magnified. While I know I can do better, I’m pleased with my first live big board attempt not having any time for any forethought and planning, and forever grateful to David for throwing me in the deep end!

Took about two hours or so to draw. Some of the visual concepts I’m pleased with while others are ho-hum. 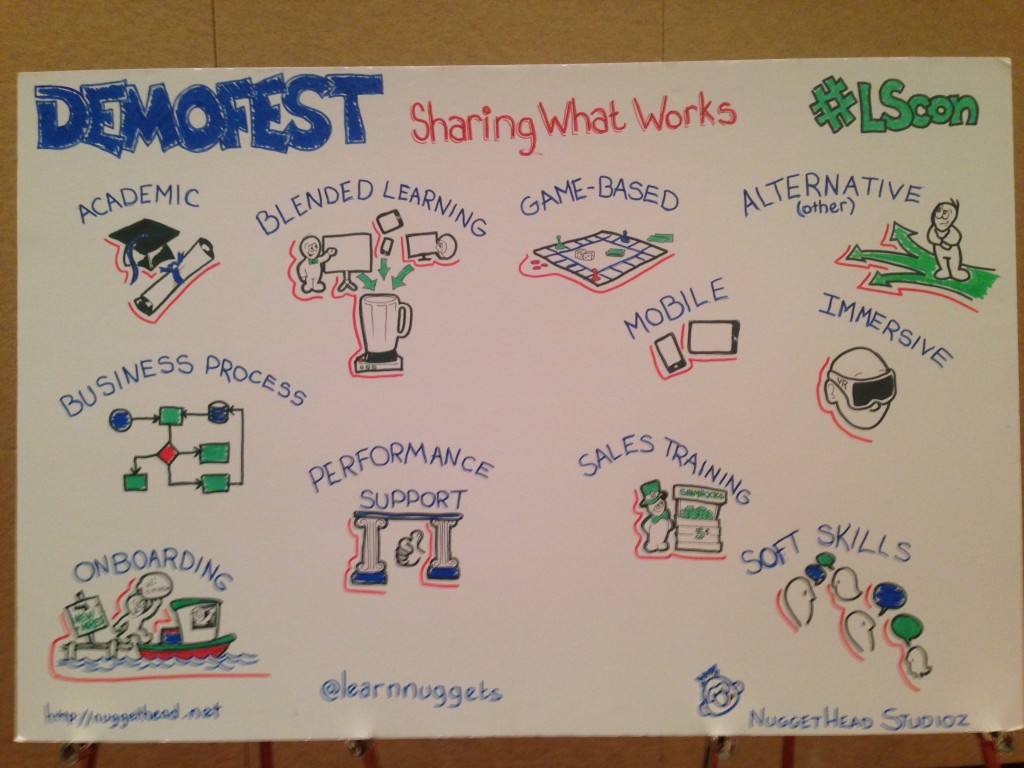 I’m a creative geek first and I am my own worst critic. I couldn’t let go of the DemoFest big board sketchnote and thought about what would I have done if given time to consider and think through a plan. Even considered going to the store and getting another board the same size and redoing it over the weekend.

Instead, I took another approach and drew a SketchToon of DemoFest using the Apple Pencil on an iPad Pro in the Concepts app. 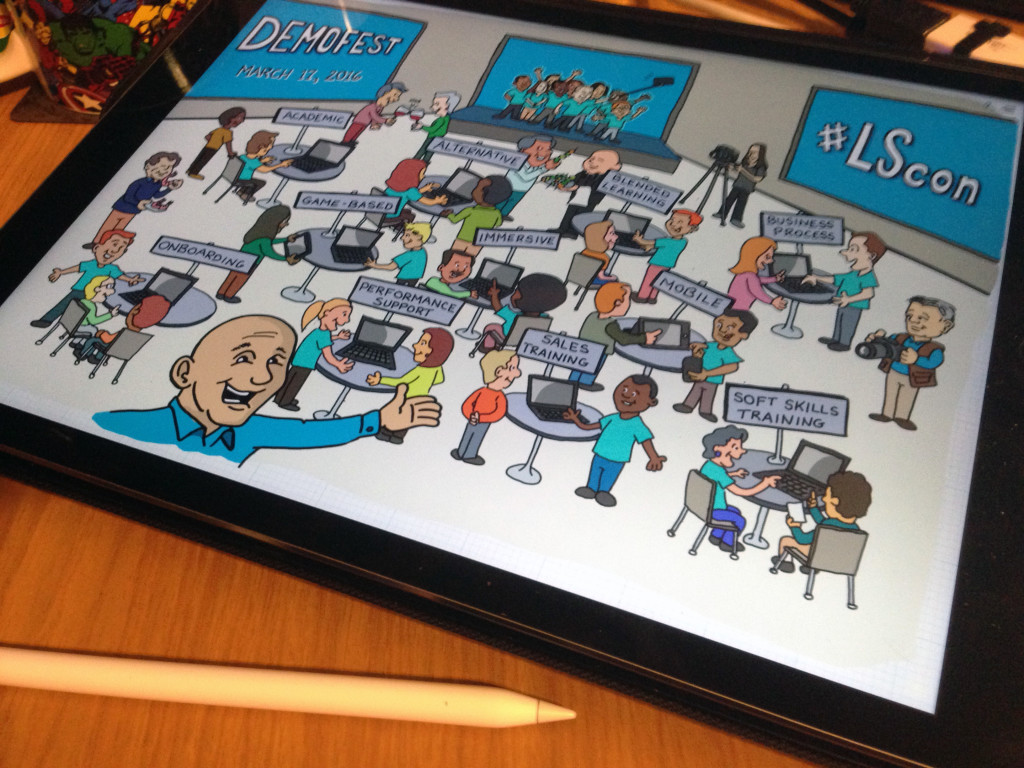 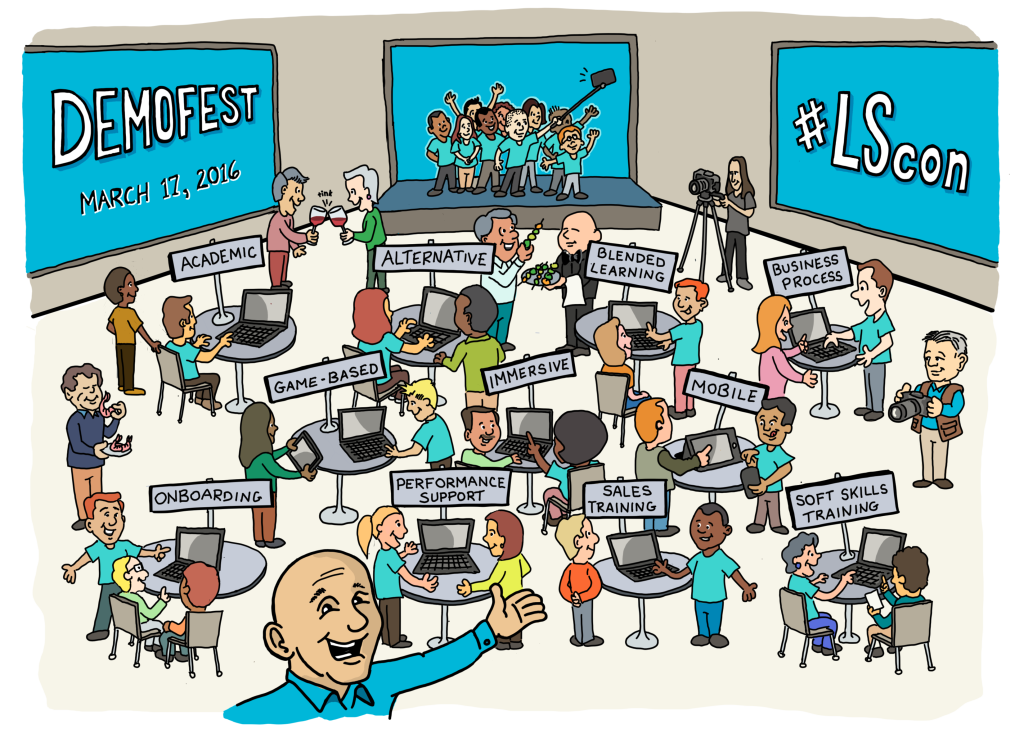 As always, an amazing week filled with new ideas, new friends, catching up an celebrating with old friends and generally enjoying spending a week in conversations on all of our collective contributions to making the learning and development industry better tomorrow than it was today.

I think Imma get some big boards and practice with some TED Talks.