You are here: Home / Elearning / Your Name in Star Wars Aurebesh built in Storyline

Star Wars: The Force Awakens is not just another movie to carry on the franchise, rather the rebirth of one of the largest pop cultures the world has ever seen. Okay, maybe not. Whether you are a fan or not you would have to be living on a remote beach not know the release of the latest Star Wars episode has captured the interest of the world.

As an elearning designer/developer as well as an artsy guy, the creative community came alive for the arrival FN-2187 and the seemingly new Jedi, Rey. The weekly Elearning Challenges by the Articulate community was not to be left out. Challenge 110 released mid-December titled, “Awaken Your Elearning Force” has garnered popular community participation.

I am a big fan of the weekly challenges! While I am not available to participate every week, I try to visit the site weekly and I am continually inspired by the creative entries. Every once in awhile a challenge catches my interest and I cannot resist. Star Wars! Duh!

This post is about the inspiration, the demo, and the scope and requirements I placed on the project. 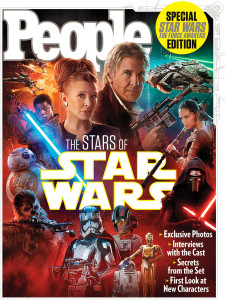 Like most, I patiently anticipated the release of Star Wars: The Force Awakens. At first, my family and I discussed that we would wait until after opening weekend and catch the movie the following week. We also planned a long time ago to spend that weekend at Disney and didn’t occur to me that we would be there the same weekend. Imagine if you can the excitement of knowing Star Wars and Christmas lights only Disney can do mashed together at the same time. I almost stopped breathing!

The Elearning Challenge had been posted over a week by the time we traveled and I was still thinking of an idea. The inspiration did not come to me until the flight home. I picked up the People Special Edition Star Wars magazine about behind the scenes and character profiles. Each character profile also had their names written in the Galactic Alphabet, Aurebesh. That’s it!

Design an interaction where users can enter their own name and it be converted into Aurebesh. Then, for fun allow users to select either the Light Side or the Dark Side. The key word in this scope is “enter”. The simplest method would be to install the Aurebesh Font, use a text-entry object, and you’re done. Not so fast. The current version of Storyline does not embed installed fonts. Get the font anyway. You may want to write your geeky relatives a letter for them to decode.

Now you know what to expect, check it out. [be patient…it may take a few seconds to fully load] 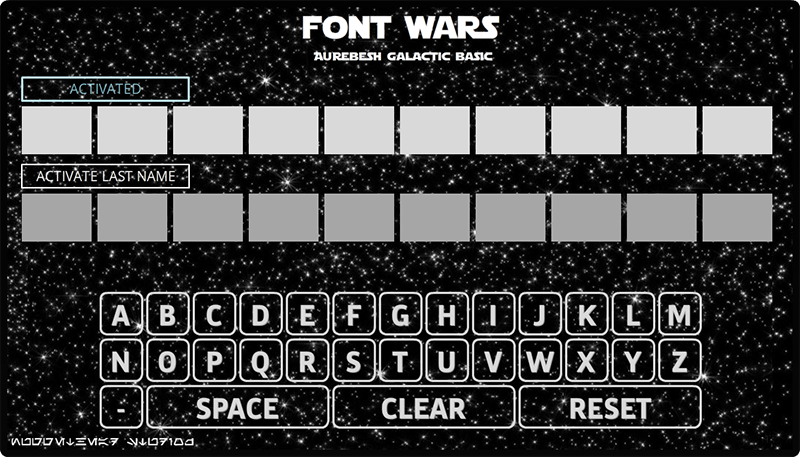 If you want to learn more about how this was constructed, keep reading.

Defining requirements before you start a project is as critical with a single interaction as it is with a full elearning course project. Without a set of starting parameters you can end up chasing yourself, or worse get into a predicament that you can’t solve.

Here are the initial requirements I sketched out on that plane ride home. 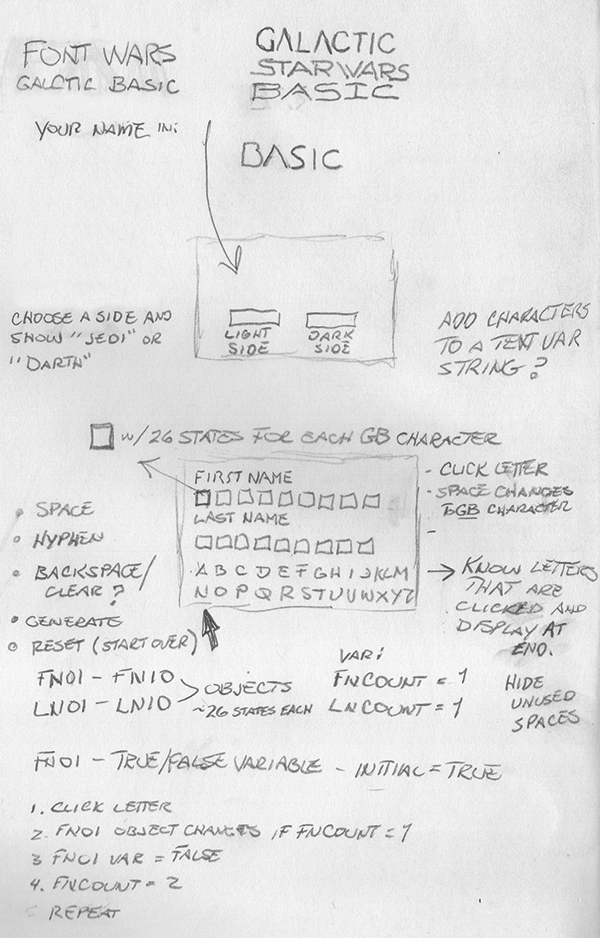 First, I had to design the Aurebesh alphabet. There are many images and graphics available, but in order to get the right look and high quality resolution I headed to Adobe Illustrator to create all the character symbols. 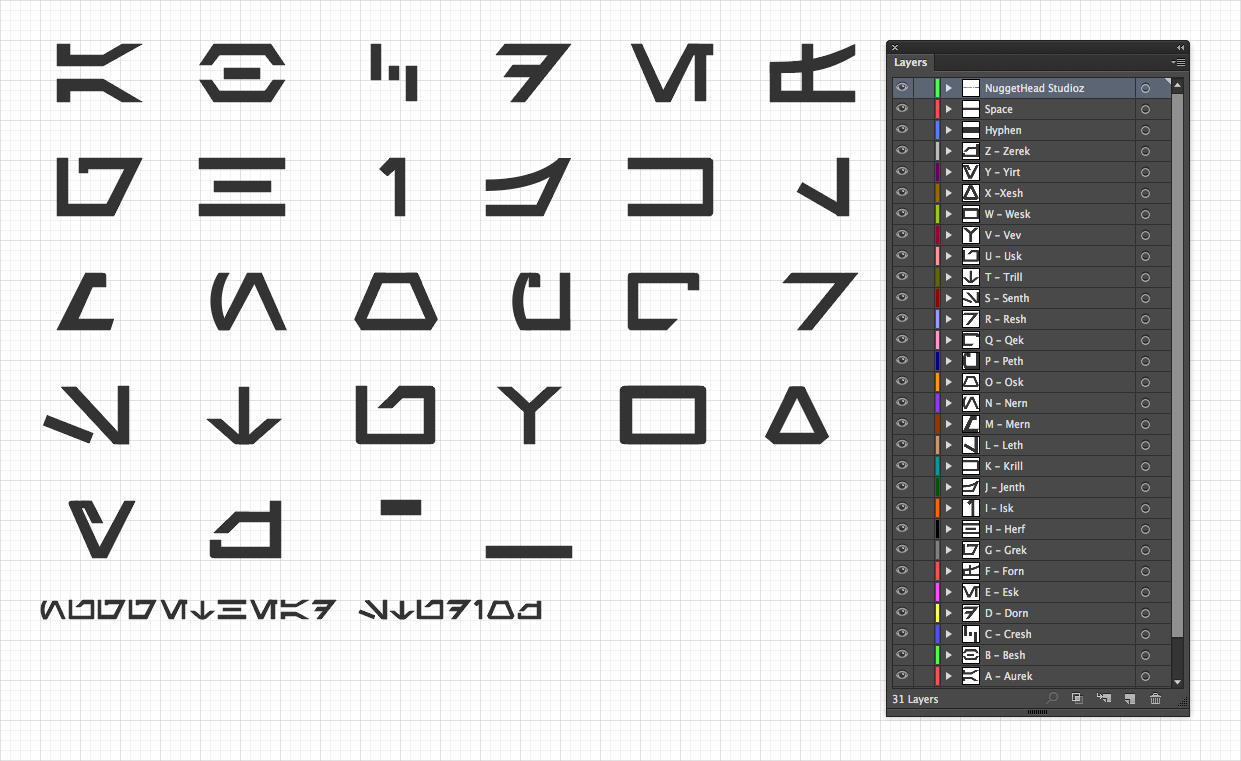 To show a visual of what an object looks like with 30 states, click the button below so see a screenshot of Storyline’s States panel for one character space object:

Later, after I built the overall structure and got it working close to how I wanted it, I asked David Anderson to do a usability test. While the first part of the interaction behaved as designed, the last part when choosing a side did not seem as intuitive. After a few tweaks and a bit of redesign, the final piece (launch demo button above) was published.

After all is done, below is a high level of the requirements and considerations:

If you know me you know I’m a storyboard geek as much as I am a Star Wars geek! Part of my storyboarding process includes post-project documentation and archiving a project. I’m still refining a process to document variable and trigger behaviors, but for now here is how each click behaves:

The above setup is high level only if a user enters first name, enters last name, and then chooses a side. There are several other triggers and variable usages to evaluate if a user attempts to activate the last name before entering a first name, choosing a side prior to entering a last name, and an option to choose a side without a last name. There’s probably a few more I can’t think of right now either!

Running Windows7 via VMware Fusion client on a MacBook Pro i7 quad processor w/ 500 GB solid state drive and 16 GB ram and Storyline still struggles like a tired Buick with 970 triggers on one slide. 🙂

The mere nature of the weekly Elearning Challenges is just that…to challenge you. I certainly do not recommend investing the amount of hours necessary to build something like this every week, but I do recommend pushing yourself beyond the standard design every once in a while. I had some time due to the holiday break to practice and what better way to practice your skills than challenge yourself.

David Anderson and the folks at Articulate have a safe place to ignite and inspire. Participate when you can and above all I hope this helps and inspires others!