I can’t believe it’s been a month and a half since I last posted about this project. It’s been a crazy time with traveling to a couple conferences and keeping pace with this development.

My next post was going to be about how to storyboard a serious comic, but a lot has changed in the project since we last talked about character development. With that, new lessons have been learned of which impacted the entire process. This post dives a bit deeper into that process.

Character development for a serious comic is not about randomly selecting a character from an online source. Just like any story, the characters have a personality that you want readers to connect with. It’s not just their dialogue, but theirs other subtle nuances and props that help guide the reader and tell the story.

That all said, our character line-up from my previous post are quite different now. Below is a then and now line-up. 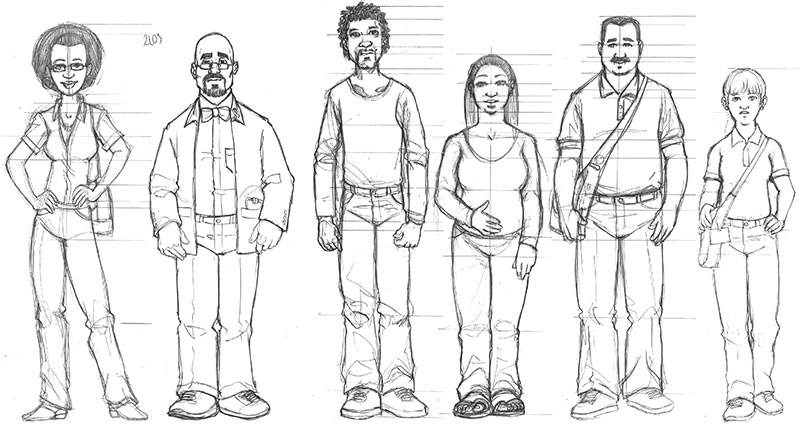 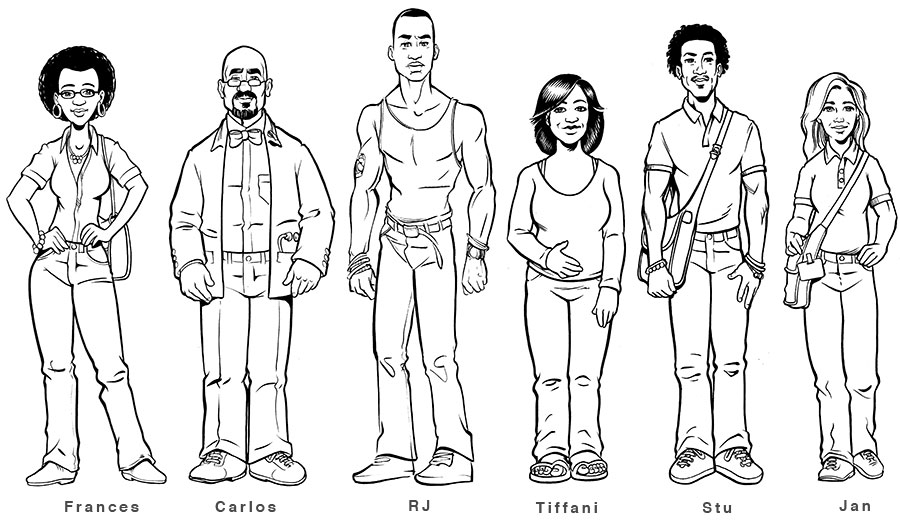 As you can see, four of our six characters were completely redone. Frances and Carlos remain the same. RJ, one our main characters needed to be more muscular, taller, and display an attitude that he doesn’t need help. Tiffani remains pregnant but needed a softer, younger, and prettier appeal. Stu was too general-looking and needed a look that portrayed his personality as someone who could relate to younger people on the street. Jan got a total makeover to look a bit older and prettier. From THEN  to NOW, RJ went through another 3-4 renditions, Stu took on a similar look and feel of the first RJ, while Tiffani and Jan just needed a new look from the shoulders up.

I had moved into production with characters getting full color when these changes were requested. Lost time? Yes. Lesson learned here is to vet out the characters completely according to the script, their individual roles, and how they will interact with each other. It set us back about two weeks and have since recovered, but now face a new set of challenges (more on that in a later post…).

Take a look at the new line up again. Notice certain characteristics about each? Frances has a beaded bracelet on her right wrist with a matching set of hoop earrings. You may think this is just an outfit designed with accessories, but in fact those small wardrobe accessories become key props in some transitions within the story.

There’s actually a funny story that goes with Frances’ bracelet. During the storyboarding process there is a scene transition from Frances’ office to Tiffani’s apartment. The dialogue for Frances in one scene suggests she’s headed over to Tiffani’s apartment, but the next scene begins with Tiffani inside her apartment talking. A big part of designing a serious comic is the visual narrative and how to keep the story going in a sequential path even though there’s no dialogue. How do you move from an office environment to inside a person’s apartment in a matter of single scene transition?

One of the basic fundamentals in sequential storytelling, or comics, is the “establishing shot.” It can be a single panel or a series of panels to ensure the characters are established in the setting for the reader. We needed an establishing shot for Tiffani’s apartment, but we didn’t want to drag the beginning of that scene because it would slow the pace down more than desired.

Just as we were winding down that day’s storyboarding session, I suggested we put a big purple beaded bracelet on Frances. Since Frances is in the two preceding scenes, we’ll establish that bracelet is on  her wrist. Then, to transition from the end of the office scene to Tiffani’s apartment we’ll add two panels. The image below shows the first panel on the left as the original ending to that scene. Adding one panel showing Frances leaving the building, and another panel simply showing her knocking on an apartment door, we’ve “established” that Frances is indeed visiting Tiffani at her apartment.

Here’s the funny part. About an hour after Greg (artist) left for the day my wife comes into the studio and shows me her new bracelet that just arrived in the mail.

Yeah, that was eerie! I took this photo immediately and sent it to Greg as a reference. Hence, Frances is now wearing this bracelet.

Next time we’ll discuss audio recording and the challenges your storyboard must have to ensure an organized management of all sound files.