Ever since I could hold a pencil I’ve always wanted to write and draw my own comic book. While I can draw fairly decent and I’m not short on stories, I’ve learned the entire process is quite daunting from sketch to print. Alas, it’s still a dream. Now that I’m fully immersed in the world of elearning, I have (or should I say ‘had’) a dream to design and develop a learning experience in a graphic novel style of artwork. That day has arrived.

A returning client came to me with a serious topic and looking for an innovative and creative way of presenting it. I was given a very rough storyboard and script (dialogue) to study and share with them my thoughts and ideas. By the time I got to the second page of the script I was already seeing a graphic novel approach in my mind’s eye. A few days later during a conference call I suggested while it may not be innovative, it is creative and thought an interactive graphic novel might fit this content. To my surprise they (6 on the core team) all concurred and thought the same but didn’t know if it were possible.

That was over a month ago. The part about a project like this being daunting was on my forebrain when I first suggested the idea. However, before that call I had contacted a long-time friend, syndicated cartoonist, and graphic novel artist if he’d be interested in a project like this. Didn’t even have to sell it and he said, “Sure! Let’s grab a pizza and start sketching out some ideas.” Over the holidays and all of this month while they’ve been working up a solid script my artist buddy has been working up concept scenes and character development while I’ve been working on a interface and prototype.

My hope is my client allows me to share the process at least as a case study if not sharing the final piece altogether. Until then, I can’t share the subject matter, the prototype, nor the client. The best I can do is share a scene sketch and a couple storyboard layout sketches. 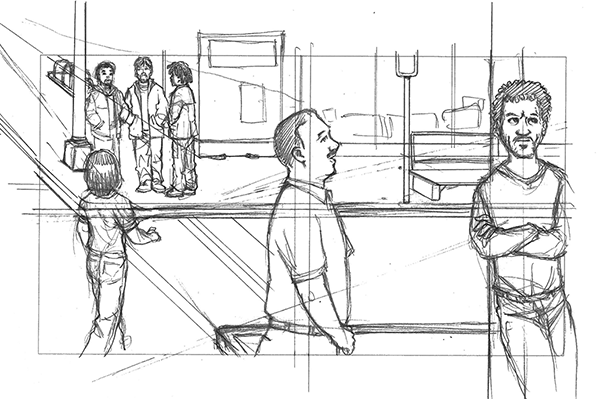 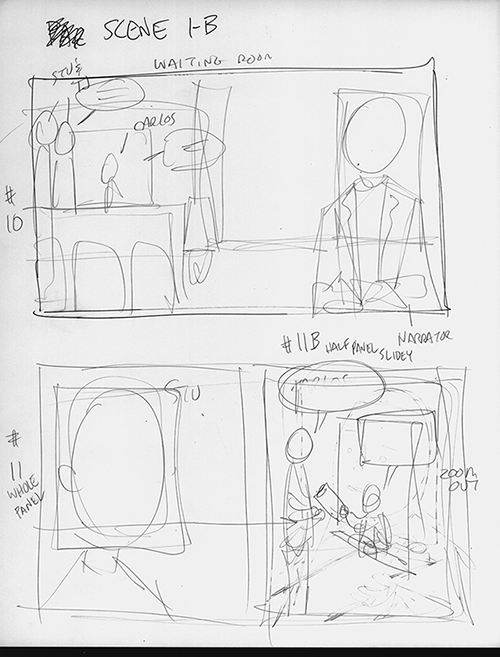 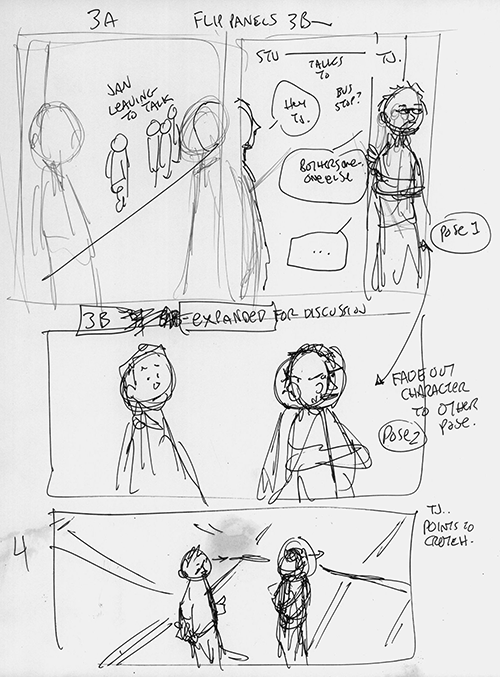 The next several weeks are going to be busy, but I’m hoping to get the green light to share more. I’m documenting the snot out of this project so at a minimum I’ll be posting more about the strategies and progress. By the way, spending a few hours at your favorite deli chomping on a pizza and drawing storyboards is my kind of living! Stay tuned!