You are here: Home / Design / Designboarding the DevLearn11 Motorcycle Patch

DevLearn 2011 is approaching. It’s less than two weeks away and many of us will see old friends, meet new friends, and experience an explosion of knowledge by attending the premiere conference dedicated and focused on the world of elearning.

There’s more to DevLearn than just the official conference, though. For many attendees much of their time is spent at the  ‘unconference’ where networking and spending time ideating with other like-minded people brings additional power. Some attend virtually via Twitter and the backchannel, while some converge on the conference city to participate in the evening meet-ups. Yet, others stay beyond the scheduled conference for additional ideating and bonding.

Enter the DevLearn11 Motorcycle Trip. A weekend motorcycle ride out of Las Vegas and into the desert for a fun-filled weekend.

Brian Dusablon (@bdusablon) asked NuggetHead Studioz (me) to come up with an idea for a motorcycle patch. Not so much a logo of sorts but something embroidered they could Velcro or sew onto a jacket. The concept? A circle with “DevLearn 2011” arced across the top and “Motorcycle Mayhem” arced at the bottom. A skull (of course), and some reference to alcohol.

The circle was easy peasy, so I started with skull ideas. What I like about this process of Designboarding is like my pencil playing a game with the client (Brian) trying to guess which one he’d choose.

BRIAN: #1 was voted on. Now add the grand canyon, a highway, and/or alcohol somewhere. And the border can be like #2. 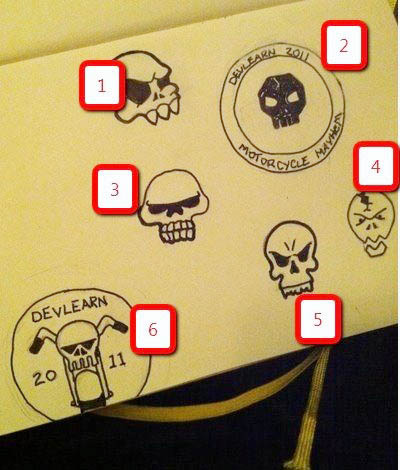 Okay, skull chosen. By the way, I figured #6 would be the winner. Go figure.  Next step is to add the grand canyon, a highway, and alcohol. Um…sure, the grand canyon on a motorcycle patch. Brian clearly doesn’t do this often. Then again, he is a ‘client.’ 🙂

I happen to know Brian is a fond connoisseur of beer so I opted for a beer mug instead of ‘alcohol somewhere.’ This is the next sketch and outlined with an ink pen. 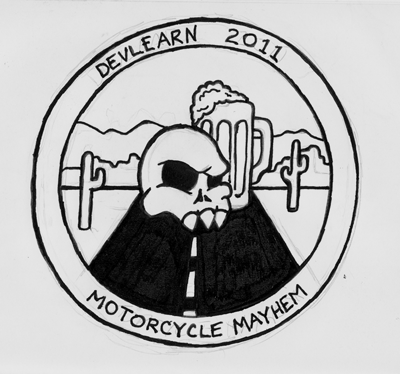 BRIAN: Like. Think the beer froth will be ok on a patch?

Spoken like a true client. Since he liked the design, I suggested taking it to the next step and digitize (create a vector) of the design and toss in some color. From there we can noodle on it some more if needed.

Here’s the first colored vector of the above sketch 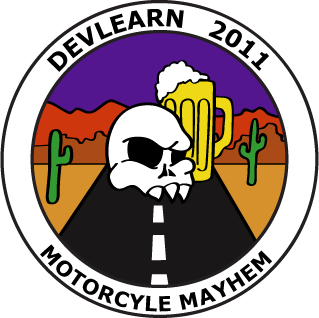 The next morning I start looking at it closer. A couple things popped out at me that I didn’t like. The balance was off. I offered my own feedback…

ME: “Motorcyle Mayem” was not riding center on the ring, so adjusted it up a bit.

– Swapped the two cactus’. The one with two arms was on the right and with the handle of the mug it was too ‘heavy’ on that side and didn’t seem to balance well.

The result of those edits… 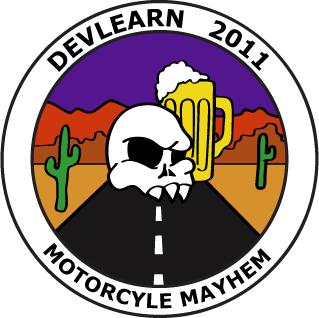 BRIAN: LMAO. Attention to detail FTW. Nice work. We didn’t need changes from the first one, but I understand

Done. Project success. Brian goes on his way off to a printer to get the patches made. I go off into the horizon in search of the next project.

If you’ve read this far and didn’t notice, you’re not alone. It seems the final design was reviewed by 15 stakeholders and no one saw the misspelled word of the second missing ‘c’ from “motorcycle.” Go ahead, scroll up. The funny thing is the inked sketch was spelled correctly – I just goobered and misspelled it when creating the vector. The company producing the patches fixed it and notified Brain. 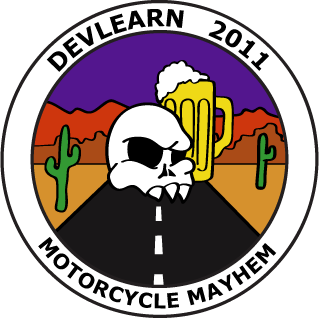 So, if you see Brian or anyone wearing this patch at DevLearn 2011, go up and check to see if they have the correctly spelled patch.