You are here: Home / Thoughts / My (first) DevLearn 2010 review: A different perspective

The reason it has taken so long to get this DevLearn review posted is because I have started over several times. First, I shared everything I absorbed in the sessions I attended. It would just be a rehash of what is already in the #dl10 stream. Then, I wrote one acknowledging everyone who I met and those who had an impact on me that week. That started to look like a novel! Instead, this is simply an overview of what it was like to be me that week. A different perspective.

In short: PLN – Personal Learning Network. If you don’t have one, start today. It’s imperative to your growth. This is my PLN on Twitter. I don’t make a move without their buy-in! I follow them for a reason…you should too. Go there now and start building your PLN and establishing amazing relationships!

The conference name DevLearn essentially stands for the Development of Learning and the tools & technologies that go into it. This was my first DevLearn and I came away with a different meaning: The Development of the Learning industry and the people who make it happen – you!

I prepared for this conference with a different mindset:

I succeeded beyond what I expected.

I was really excited to see so many friends again and meet new friends I had gotten to know online. For me, this was more about solidifying existing relationships and making new connections. If you have attended conferences in the past, I’m sure you all have the same goal. The eLearning Guild knows that networking, establishing relationships, and making connections is paramount in the growth of this industry. Social learning is a very hot topic, and what better way to learn from each other socially than to be in an environment that fosters just that – DevLearn

I did the normal pre-conference warm up exercises. I studied the concurrent sessions, read the books by the keynote speakers (just got the new books), and begun the arduous task of mapping out a schedule. Ha! Like that ever works out like I planned!

When I arrived late Tuesday, here’s what the three days ahead of me looked like on my DevLearn app: 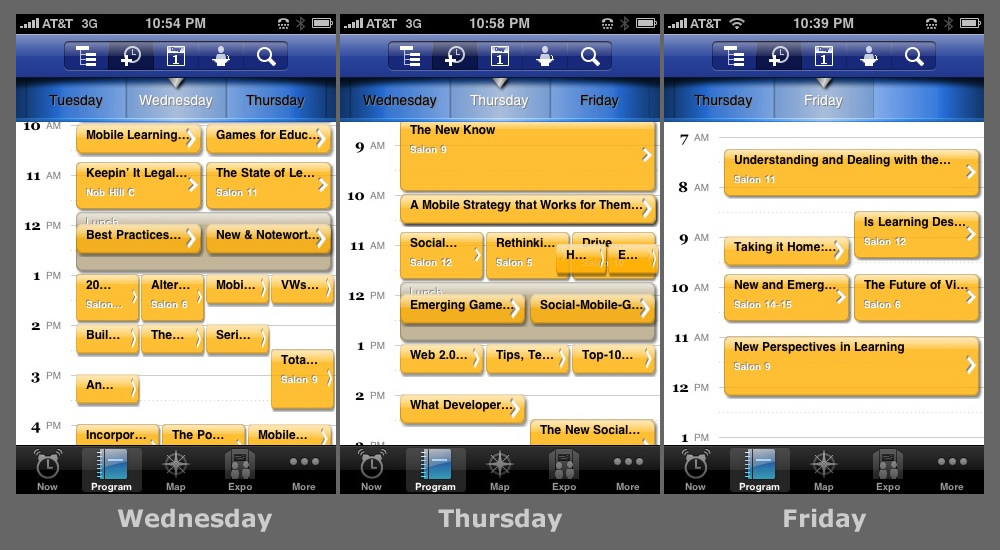 Piece of cake, right? Not! I bounced around so much I now know what a pinball must feel like!

Attending conferences such as these, there are just as many who want to attend but can’t due to one reason or another. A trend in the last year or so was to micro-blog your notes of a session, or tweet comments and quotes from a session. Most folks did this time, too and some are flat out masters at it. At Learning Solutions 10 back in March, I was one such diligent participant of the Twitter stream.  In doing so I missed the physical experience of the sessions themselves – the social connections. I was more concerned about my followers getting the info than I was getting it from being there. They followed a hashtag from their offices back home and in small part I helped feed it. The value was not as rewarding to me. I had to download the slide decks and re-read the hashtag session stream to recall the sessions. I was physically there, but mentally I was not.

A trend this year (planned or otherwise) was the #dl10NOT hashtag. All those who could not attend began following it as well as #dl10. Clever! From that, several who did #NOT attend wrote fantastic blog posts on how to attend a conference virtually as well as compiled and aggregated valuable post-conference resources.

This time however, I vowed to spend more quality face time and not so much Tweet time. We spend a large majority of our time disconnected from reality to get connected to the Twittersphere and other social media platforms. When we have the rare opportunity to spend real time with those in our PLN, and more importantly meet them for the first time after having countless conversations online, what do we do….we tweet that we just met them.  Instead, I kept my iPhone in my pocket more often, stuck my hand out in a gesture of greeting, and initiated a real conversation. It was so much more rewarding and satisfying.

Two very clever ways of engaging participants and demonstrating the value of Twitter as a learning tool.

The Dr. Srangelearn ARG (Alternate Reality Game). The competitive nature of battling for top ground was so engaging that when I returned home and reviewed all the articles and links discovered through playing the game, I had not realized what an awesome collection of resources the game produced. I can’t wait to play again! If you did not play, the game was about how to overcome the objections of new learning technologies in your organization. Here is each of the five Mad Scientist’s resources they shared:

An ingenious game of building a prediction model of what words would be tweeted in an upcoming concurrent session block of time. You would submit three words via DM (Direct Message) to the game’s Twitter handle of what you would predict would be in the Twitter stream. I was hanging in the top ten until about lunch on the first day. I got so caught up in the energy of the conference that I missed several opportunities and simply let go. Yes…I quitted!

Breakfast Bytes are a great way to get the brain into gear before the day starts. Not everyone is a morning person, but those who are get a lot of value out of these informal conversations. Maybe we should have Dinner Data Dumps in the evenings for the opposite value. Debrief, debunk, informal dump the day’s sessions?!

I’m still deciphering why these  attracted me so much, but it worked. They were open-air venues with a more informal casual conversational style discussion. I was attracted to the social aspect and it seemed to match my overall goal. Maybe it was the venue, or having four instead of one and not shoved in the corner of an expo hall that made these work so well. Just about every block had every chair filled and two to three deep standing.

I can’t close out without mentioning DemoFest. It was extremely rewarding and humbling! I was very nervous to be presenting alongside some of the world’s leading designers and developers.  If anything, I hope for those who stopped by that I was able to share a tip or technique that you can use in your own design & development. Congratulations to all the winners and hats off to everyone who worked so hard and participated!

You may have noticed I didn’t call anyone out by name in this post. I wanted to reserve this section for those who I do want to mention and thank publicly:

Brent Schlenker for being simply Brent. And for being the world’s best host!

Heidi Fisk and David Holcombe for ensuring the eLearning Guild stays true the roots of this industry – you!

Juli, Ina, Luis, David, and Mary. Yes, this is the backbone crew of every eLearning Guild conference. Without them standing guard literally from sunup to sundown, we wouldn’t have the great experiences we do. Thank you!