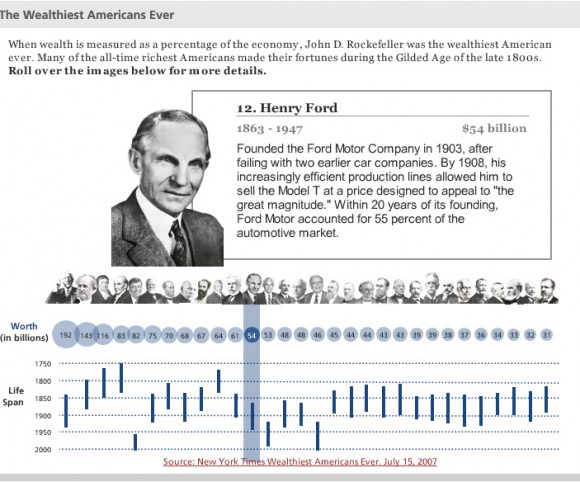 This was an exercise in multiple layers, triggers, and hover states using shapes all while contained on a single slide.

Several years ago I came across a 2007 NY Times link to an interactive timeline titled, Wealthiest Americans Ever. My first impression was how much I liked how clean and simple the overall design was with an elegant way of presenting a considerable amount of content in a nicely contained package. I bookmarked the link in a folder I affectionately labeled, “inspirations.”

I was part of the Articulate Storyline Beta community in it’s early days the summer of 2011. One of the requests asked of us was to stretch Storyline as far as we can and essentially try to break it. After tinkering around and getting used to the software, it occurred to me that just maybe this was an opportunity to recreate the NY TImes Wealthiest Americans Ever in Storyline without programming a single line of code. Although the original and this example are not exactly the same, they do share a very close kinship in how they look, feel, and behave.